What is a Pectoralis Major Tendon Rupture condition?

Pectoralis major tendon rupture results from violent, eccentric contraction of the muscle. Over 50% of these injuries occur in athletes, classically in weight-lifters during the ‘bench press’ manoeuvres.

What are the early signs of a Pectoralis Major Tendon Rupture?

You will feel a tearing across your chest with a sudden onset of severe pain. You may have pain in the upper arm area and bruising, and a pocket formation above the arm pit area.

How long do I stay in hospital after Pectoralis Major Tendon Rupture surgery.

Surgery is usually required to repair pectoralis major injuries, except when there is a partial tear of the tendon

What is the recovery time after Pectoralis Major Tendon Rupture surgery?

Over the course of 6 weeks the most motion should be regained. Typically return to full strength and activity within 4-6 months. Strenuous training such as bench pressing is discouraged for 6-9 months.

Should I wear a brace after Pectoralis Major Tendon Rupture surgery?

No exercise until end of 2nd week. Sling immobilization for 2 weeks.

What exercises can I do after Pectoralis Major Tendon Rupture surgery?

The pectoralis major (large pectoral) is a large muscle on the front of the upper chest and arm. 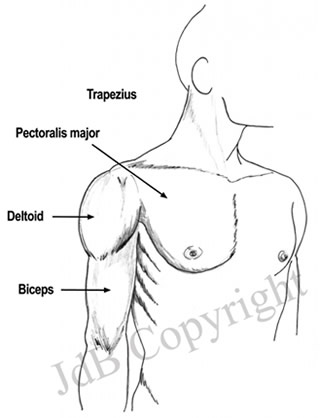 Fig 1. Outside view of the large muscles around the shoulder.

The two parts of the pectoralis major muscle: Sterno-costal and clavicular. With the arm moving backwards (as in the Bench Press exercise) there will be more strain on the horizontal part (which tears more commonly) than on the oblique part.

The action of the muscle is to bring the arm in from a stretched out position towards the body. This action is well understood if one considers that in gorillas the pectoralis major is extremely well developed due to the fact that they hang and pull themselves up on branches continuously. In a human the muscle pulls the humerus (upper arm) towards the body and this action is often done in exercises like pull-ups from an overhead bar (in conjunction with the latissimus dorse) as well as other exercises like the bench press and dumb bell flyes.

The rupture of the tendon is often encountered in body builders and heavy weight lifting. The reason for this may be that the pectoralis major muscle develops at a rate more than the tendon can withstand. It is interesting to note that this huge muscle inserts into a tendon which is only about 1½cm wide where it inserts on the upper humerus in a thin strip just lateral to the course of the long head of the biceps. When this tendon is torn it often occurs in exercises like the bench press or has been seen in sports like rugby when the arm is around another player in a scrum, the scrum collapses and the arm is forced in horizontal extension. An injured person may hear a distinct snap when this powerful muscle is detached off the bone.

Steroid use may weaken tendons and could, in certain individuals, play a role. 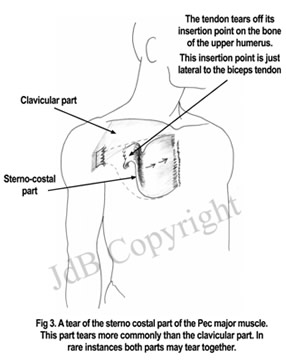 A tear of the sterno costal part of the Pec major muscle. This part tears more commonly than the clavicular part. In rare instances both parts omay tear together.

After such a rupture there is immediate intense pain which may gradually subside. Blue discolouration might be seen in the upper arm due to the fact that the tendon was severed from the upper humerus. There is a defect over the lateral aspect of the pectoralis major with the pectoralis major appearing deformed and bulky closer to the breastbone.

This is a massive muscle and it is the opinion of this author that it should always be repaired as soon as possible. If this tear is left for too long the muscle slowly retracts towards the breastbone and it could become very difficult to mobilise it again to its insertion.

In “neglected” tears muscle and tendon can be mobilised and if it does not reach its original insertion in spite of extensive surgical mobilisation the surgeon may be forced to insert a tendon graft between the end of the tendon and the site of bony insertion. A chronic, long-standing tear of the tendon – the muscle retracts and due to this shortening it may become difficult or impossible to repair.

The technique of repair requires attention to detail as this massive muscle pulls on a very slender tendon and good fixation techniques by the surgeon is mandatory. Following this surgical repair the arm is kept in a sling in internal rotation for at least 3-4 weeks to allow healing. Gradual mobilisation is then permitted and heavy loads on this muscle and tendon should not be done before 3 months following the surgery. Repair of Pec major. The muscle is large compared to its tendon – the repair done by the surgeon must be strong enough to withstand the pull of the muscle till the tendon has healed to the bone. Torn Pec major on the right side.