Although cricket is not a contact sport, the level to which it is played nowadays does take its toll on the players, especially professional cricketers. Find out where and why most injuries occur and learn to prevent cricket shoulder injuries. 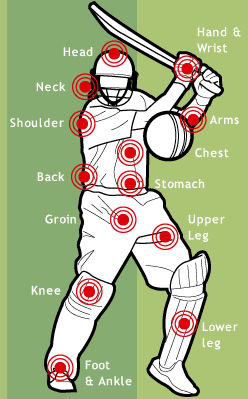 Head injuries are quite common among cricketers – especially among young players. This type of injury is usually the result of a blow to the face from a ball travelling at a high speed. The nose, teeth and jaw can suffer severe fractures and bruising in this way.

As in rugby and soccer, concussion can occur. Symptoms include amnesia, memory loss, headache, confusion, poor coordination or vision difficulties. Players who have suffered concussions do not necessarily lose consciousness.

Little can actually be done to treat a concussion, other than rest. However, it’s crucial that a physician examine anyone who might have a concussion in order to exclude intracranial bleeding.

There are two main types of shoulder injuries which affect cricketers.
The first type is an overuse injury of the shoulder associated with throwing, typically referred to as “thrower’s shoulder”. The second type refers to acute, traumatic injuries,that are especially prevalent when players fall on a shoulder while they are fielding.

Thrower’s shoulder is a chronic shoulder pain that gradually worsens while the player is throwing the ball.

There are a number of potential causes:

Thrower’s shoulder involves injury to the tendons of the rotator cuff (the muscles around the shoulder joint), and may include weakness around the scapula (shoulder blade). There may be associated bursitis (inflammation of the joint sac) within the shoulder.

Management of this injury includes appropriate diagnosis and identification of all the potential causes of the shoulder pain. Pain management and rehabilitation are the two mainstays of treatment for this condition.
Rehabilitation is focused on both stability and strength around the shoulder joint. It is essential that there is a balance of strength around the joint.

Rehabilitation and correction of the cricketer’s throwing technique is important to prevent the recurrence of injury.

Traumatic injury to the shoulder classically occur when a fielder dives for the ball and lands hard on an outstretched arm. The injury could include damage in the form of tears to the tendons around the shoulder and in isolated cases dislocation of the shoulder may occur. Pain in this kind of injury usually limits participation in the game.

Management includes appropriate diagnosis, which in some cases will require referral to an orthopaedic surgeon. If the injury is significant, surgery may be necessary.

Following this, it is essential that the cricketer is appropriately rehabilitated to prevent weakness of selected muscles, which may in turn lead to a future overuse injury.

Not only golfers and tennis players suffer from arm and elbow injuries, cricketers are often struck down by them as well.

Improper batting and bowling techniques as well as incorrect equipment, such as bats that are too heavy, put unnecessary strain on the forearm.

Common types of injury include:

Tennis elbow is localised to the outside of the elbow. It can occur as a result of throwing, especially if the cricketer leads the throwing motion with his elbow.

Another possible cause of elbow pain would be a batsman attempting to use the wrist to flick the bat. The pain is localized to the elbow and is aggravated by wrist and finger movements (such as shaking someone’s hand).

This injury is managed using physiotherapy and rehabilitation to correct strength imbalances of the forearm. It is important that the throwing and batting technique is assessed to identify risk factors for this injury.
Although not as common as tennis elbow, thrower’s elbow is just as debilitating and painful. Thrower’s elbow effects both the inside and outside of the elbow.

Lower back injuries can take the form of stress fractures, particularly in adolescent fast bowlers. Other areas that could be damaged include the disc, facet joint or surrounding soft tissue. Spondylolisthesis or the forward slipping of one vertebrae over another, affects younger cricketers more than older players.
Lower back pain is not a problem exclusive to the fast bowlers and is equally devastating when it happens to batsmen or wicketkeepers.

There are many potential causes of these injuries. Poor bowling technique (called a mixed action technique), overbowling and relative youth are the common culprits. Other possible causes include poor physical preparation, the impact forces associated with the delivery stride, inadequate footwear, and previous injury.
Early detection and diagnosis is very important. Following this, treatment includes physiotherapy for pain and rehabilitation, which is undertaken by a physiotherapist and biokineticist.

The focus of the rehabilitation is twofold:

Firstly, it is essential to retrain the core muscles which are responsible for spinal stability.
Secondly, and equally as important, is strengthening of the entire trunk, upper and lower body in order to help the body deal with the huge impact forces associated with fast bowling.
Biomechanical changes are often necessary and these can be achieved by means of collaboration between the medical team and the coach.

Cricket players can be hit in the chest by a ball travelling at a high speed. This type of injury is relatively common and cause contusion (bruising) of the soft tissue.
However, the injury might also include rib contusions, rib fractures, costochondral (the small joints between the sternum and ribs) separation and dislocation, sternum fracture and even an injury of the lungs.

As is the case with chest injuries, injuries may occur when a ball travelling at a high speed hits the abdomen. If the ball hits the solar plexus, it is particularly painful. This may cause the diaphragm to spasm, resulting in difficulty in breathing – a sensation commonly known as “getting the wind knocked out of you”. For the most part, only the soft tissues of the abdominal muscles are involved.

In rare cases, damage to the internal organs such as the kidney, liver or spleen may occur.

Groin injuries are not only one of the main causes of missed games, but many players with chronic groin pain have their performances severely affected by the condition.

A groin strain is a stretch, tear or the complete rupture of the muscle called the adductor longus, which runs from the pubic bone to the inside of the thigh bone. Groin strains will reoccur often if they are not allowed to heal fully.

Needless to say, getting hit by the ball in the groin is – very – painful and may result in testicular rupture. Wearing a cricket box, also known as a cup, is essential.

There are numerous injuries that can be suffered by the hand and wrist. Fractures of the fingers are particularly common.

The most obvious area where injuries occur is at the striker’s end where finger/hand injuries are caused by the tremendous impact of the ball.

The hand consists of eight wrist bones, the palm with its five metacarpal bones, and the fingers. Treatment of finger fractures differ. Such fractures are generally treated by means of a so-called buddy strap by which the injured finger is attached to the adjacent finger. Any fracture takes six weeks to heal completely.
It is important that the finger is X-rayed to ensure that the fracture does not include a piece of bone that is displaced and will hamper the appropriate healing of the bone.

Management includes strapping the finger to provide support by splinting it to the adjacent finger. In a limited number of cases surgery may be required. Physiotherapy is important to ensure that the finger and hand do not become stiff during the period of healing.

This can be a very frustrating injury as it can keep a cricketer out of the game for a number of weeks.

Cricket involves a lot of sudden, explosive movements and rapid changes of direction. The result is hamstring strains by the dozen (or is that by the six?) Hammies can also be pulled when reaching for a ball or sprinting between wickets.

A muscle strain occurs when a muscle is loaded and a number of the muscle fibres become torn and inflammation of the tissue occurs.

A chronic hamstring tear is an injury common to many sports. Cricket is no different.

There are numerous risk factors for developing this injury, the most likely being a previous injury to the hamstring muscle. This is a very important point as it emphasizes the importance of rehabilitating the hamstring muscle adequately when it is first injured, to prevent recurrence.

Other factors which could cause a chronic hamstring strain would be muscle imbalance, lower back inflexibility or pain, inappropriate training, and slipping while batting or bowling.

A chronic hamstring strain can also involve an underlying ‘nerve problem’ and should be assessed by a physiotherapist.

An acute hamstring strain is associated with an acute overload of the muscle, which could occur during batting or fielding in a pressure situation.

Management focuses on rehabilitation of the hamstring and surrounding muscles. It is important that this rehabilitation is sport specific and that the muscle is retrained using similar speeds and loads as required when playing cricket.

As in any sport, the cricketer’s knees take a battering. Sudden changes of direction while running flat out between wickets or coming to hitting the ground after jumping to catch a ball all take their toll on the knee caps.

There are three grades of injury:

Grade one jumper’s knee is when the pain only occurs after training .

What can be done?

Grade two jumper’s knee is when your knee hurts before and after exercise, but the pain decreases once you are warmed up.

The biggest risk factor is over training. Beginners are also at increased risk because they are not used to the high impact running has on the muscles and joints of the lower leg and foot.

Another common injury is a calf muscle strain which can be caused by twisting or pulling the muscles or by being hit in the back of the leg by a cricket ball. Chronic strains are usually the result of overuse.

An acute strain is caused by trauma or an injury such as a blow to the muscle or overstressing the calf muscle. Chronic strains are usually the result of overuse – prolonged, repetitive movement of the muscles.

Contributing factors include an inadequate warm up, lack of flexibility, fatigue and insufficient strength.

There are numerous injuries that can be sustained by the foot and ankle. Sprains and strains commonly occur.

A sprain occurs when the ligaments around a joint are overstretched or tear. This is often due to a sudden wrench or twist which causes the bones of a joint to separate unduly.

Minor sprains and strains can be treated at home using the following measures:

Start treatment as soon as possible to reduce swelling and speed up recovery. The less swelling, the more blood can get to the injured part to start the repair process.

Another injury to consider is posterior impingement of the ankle. This injury is characterised by pain in the region of the achilles tendon. It is caused by maximal plantarflexion (pointing toes), most especially when this occurs at a time of impact.

This injury classically affects the right foot (of a right-handed bowler) at back foot impact during the delivery stride. This can be aggravated by uneven surfaces, which are commonly found at the run-up at the nets. There is a ‘pinching’ or impingement of the soft tissue at the back of the ankle.

Management may require surgery in a limited number of cases to reduce the impingement of tissue by bone or to release a restricted tendon. Other management would include strengthening to allow controlled landing of the foot and assessing the bowling biomechanics to prevent poor landing mechanics.

Coaches and players should be aware of the quality of the surfaces that fast bowlers practice on.

Pain can be very uncomfortable, understanding your shoulder pain can help you make a decision on what to do next.